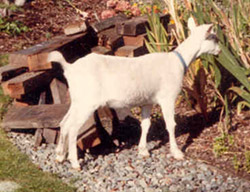 Little Maybelle - Browsing on more than 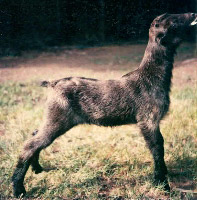 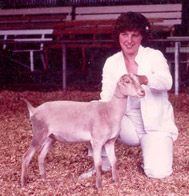 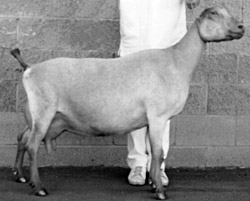 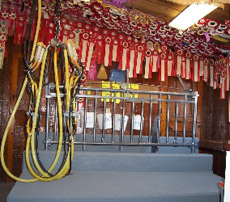 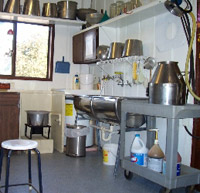 Just "Part of the Herd"

The Apple Orchard - Pies in the summer, Cider in the Fall!

Washington State Fair Display
"Do you cut off their ears?" 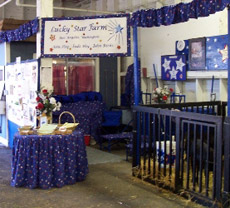 We looked for our first “dairy” goat in 1977 when we wanted some non-chemical way to get rid of acres of poison oak.  Some friends recommended a goat to eat the poison oak.  So one Saturday morning we got in our car and went in search of a goat, little did we know this decision was to change our lives forever.  Don likes to point out that this was one of those left turns you sometime take in life.

That fateful Saturday brought us to a farm with what we know now to be a large mature Saanen buck.  Don asked if they had a smaller model and we were shown a small (we now know very small) white doe kid with horns, tied to a tree.  We quickly decided she looked like she needed a new home, so into the back seat of the car she went.  Of course she had diarrhea and later we learned worms and many other parasites.

Our first stop was at the local feed store, because we knew she had to have food.  They recommended we return when Mary was there as she was the goat expert.  This turned out to be Mary Konnersman- Keehn and she was an expert and became a long term friend and mentor (she would later help deliver our second son-Jay).  Our next stop was the library to pick-up the only book they had on goats - David Mackenzie’s book. We stayed up all night reading that book.  We knew we were in trouble by the next morning.  Our “goat” obviously had parasites and something called scours.  Green and runny we learned was not OK!  We also learned she needed a buddy, a barn, feeders, etc. and most importantly a VET.

That night as I read the book and kept saying “OH NO” due to all the things we didn’t know about goats Don had fallen in love with this little doe, now christened “Maybelle”.  There was no going back.  The most important thing we learned was that Maybelle needed a companion.  We went back to the feed store to purchase alfalfa (something we’d never heard of and now call "green gold" as our retirement has long been spent purchasing hundreds of tons of the stuff over 40 some years), collar and leash, hoof trimmers, hay feeder and the advice from Mary.  Mary also gave us the name of someone who might have a “weaned wether” (whatever that was) to keep Maybelle company.  We then went to the hardware store to buy the materials to build a shelter for Maybelle and her soon to be purchased companion.  (We have since learned that disposable income, and sometimes not so disposable, goes to the goats for showing, hay, Vets, barns etc.  Don says we would be monitorial rich had we saved what we had spent on the goats.)

We built Maybelle her house and then went to meet Sam and Michelle Ferguson looking for that “weaned-wether”.  These folks were crazy - they had 8 goats (kids and does).  I mean really - 8 goats??  We purchased our weaned wether "March" and Michelle and Sam began furthering our goat education.  They also were to be a great resource over the next several years.  They soon sold us a “registered” Alpine who would need to be “shown”.  That first goat show (in linen pants and silk shirt the only thing Judi owned close to “white”) was another life changing event as we had to buy a truck to take the goat to and from the show and boy did we have fun with all the folks there.

We added more Alpines from Mary’s and others over the next few years.  Maybelle grew and was registered NOA, we joined the local goat club and made many friends-went to more goat shows.The next summer, at a local club picnic, the fund raiser was the raffle of a Lamancha doe kid. Don allowed Judi one $1 ticket. Of course there is something to be said for living under a “Lucky Star”,  Judi’s ticket was the winning pick.  Tan-Oak’s Sacha came home with us.


Now we had to figure out how to breed her.  In their usual intrepid fashion Don and Judi took an AI class (the only Lamancha buck in the area was Sacha’s sire).  They puchased the only Lamancha semen the instructor had in their tank- *B Little Orchard S Sea Skipper.  As luck would have it we were successful with the AI attempt that fall and the first Lucky Star Lamancha was born.  That doe kid would go on to be GCH Lucky Star’s Rosa Maria (LA 92) and every Lamancha in the herd to this day is somehow related to Rosa.

Over the next few years we traded our Alpines for more Lamanchas, our son Chris, added Nubians and then sold those for more Lamanchas.  The original doe Maybelle became GCH The Lucky Star’s Maybelle *M, (see we do live under a Lucky Star) and she was bred Lamancha as well producing more GCH Lucky Star grade does.  The grade lines were eventually phased out.  Our youngest son Jay always stuck with Lamanchas.  (He mainly liked earning money working on the farm.) On a side note, you ever wonder how we ended up with a National Champion named “Crazy Cradle” you just have to think "little boys have funny ideas about naming dairy goats."  We had a pedigree line of goats named after various Yo-Yo tricks - and as a result you end up with does named Baby in the Cradle, Down-up, and Crazy Cradle.

In 1984 we moved the whole family and farm from Northern California back home to Washington State.  This time we were able to have a farm suited more to the goats and a barn built to our specific needs.

Today the farm is run by Don, Judi and their partner John Ricks.  We still make breeding decision by committee although John mostly fixes things, chauffeurs, fixes things, takes does to the appointed buck, fixes things and well you get the picture.  Our son Chris lives 4 houses up the street and still helps with milking every night.  Jay lives on nearby Whidbey Island and swears no farm for him, although his daughters and son love the goats and the farm- 2 are already showmen. Maddy is becoming well known for her love of Alpines so more of those may be on the horizon.

John has retired closing his construction business and has been catching up on Judi’s projects at the farm.  Don is the Controller and Treasurer for a forest products company and Judi has retired for the third and final time. The only CFO job she now has is running the farm and volunteering.  Don enjoys his job, so no retirement is on the horizon for him just yet. In addition to the goats we have had many other animals and projects.  One is our Anatolian Shepherd Dogs. We also have over 50 fruit trees, many vegetable and flower gardens, we have made wine under our own label and all consider ourselves reasonable cooks. We are not a commercial dairy and use our milk ourselves.

If you are ever on the Olympic Peninsula-- we love to show off the farm, goats and dogs so please give us a call and pay a visit!