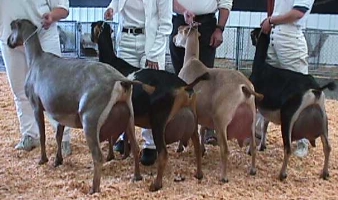 This lovely Get of Sire represents not only four different dams, but four different family lines, four different owners and four different management styles! Thank you Cindy Silva, Merri Bradshaw and Kat Drovdahl for helping with this picture and the loan of your lovely does. In addition, there were two more Kareem daughters owned by Laurie Acton one scoring 89 (3rd place at the 2003 Nationals as a yearling) as a first freshener (milking through) and a second daughter scoring EEEE 91that is also a finished GCH. Once again these were 2 more dam lines, another owner and another management system. Cindy Silva also finished Kareem's son CH Lucky Star's QK Pinnacle last year. Laurie's now 4 yr old finished in 2006-Vonetta. If you have a finished KAreem daughter I have not listed please let us know.

So far this year, 2006, several more daughters have been added to the Kareem "(90 or better list" Our own Star Search, Merrihill Farm's Navigating Your Heart and Tempo's Vonetta and Mia.

Kareem Daughters
In addition, to the does listed below, there are at least 10 other Kareem daughters and several sons with GCH legs. We recommend using Kareem semen on does who do not need improved length of neck, length of body or increased stature or strength. He has been very successful in improving mammary (especially fore-udders and teat placement), milk production, rear leg set, rumps and breed character. (Semen is sold out!)